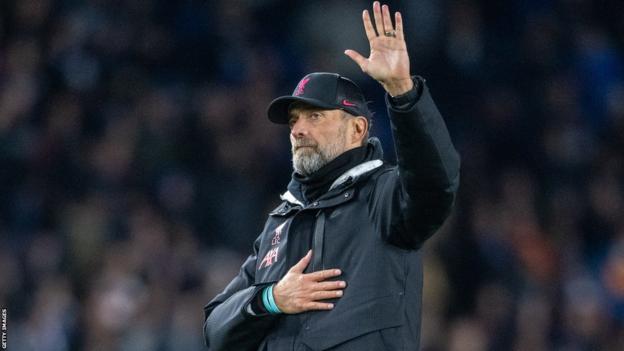 Liverpool manager Jurgen Klopp has said he will not leave the club unless he is forced to, and hinted at changes at Anfield during the summer.

The German's comments come amid a run of poor form for the Reds, who are ninth in the Premier League and 10 points off a top-four spot.

"Either the manager's position changes or a lot of other things change," said Klopp.

"So, as far as I am concerned unless someone tells me I will not go."

He added: "So that means maybe there is a point where we have to change other stuff. We will see that, but that is something for the future. Like summer or whatever. Not now.

"I have space and time to think about it. We have to play better football now."

Klopp reiterated it is unlikely any more signings will follow Netherlands forward Cody Gakpo in January, while midfield trio James Milner, Naby Keita and Alex Oxlade-Chamberlain will be out of contract in the summer along with forward Roberto Firmino.

I'm not too loyal - Klopp

Liverpool were beaten 3-0 by Brighton on Saturday after what Klopp described as a "really bad" performance, and he said his team had to get "back to basics" to improve their form.

They face Wolves in an FA Cup third-round replay on Tuesday, which is live on BBC One from 19:30 GMT, and prior to the game Klopp also denied he had been too loyal to some of his players.

"Yes, of course I have heard it. I heard that before and I am not," said Klopp.

"I am loyal. I think everybody should be loyal, but I am not too loyal."

He added: "The problem is too complex. You have a good player who did a lot of good things in the past and then in your mind [you think] maybe that's it for him.

"If you can then go out and bring in another player to replace [him] that makes sense.

Liverpool's struggles have seen them concede the first goal 21 times in their past 35 matches, and they have not kept a clean sheet in the Premier League since October.

However, Klopp does not think some of his players have stopped listening to him.

"I was not that often in a similar situation, but I know exactly how it works when things don't go well," he said.

"There is a list of things you go through and one of the things is the players aren't listening to the coach any more.

"In Germany we say the manager doesn't reach the team any more. So I understand it looks like this sometimes but it is just not the case. You can take that off the list.

"Everyone feels responsible. There is nobody sitting there thinking, 'I was OK but he wasn't'. It wasn't there, I don't see it, I don't hear it, it's not there.

"If it was here then the player would have a real problem. That is the moment the problems really start."